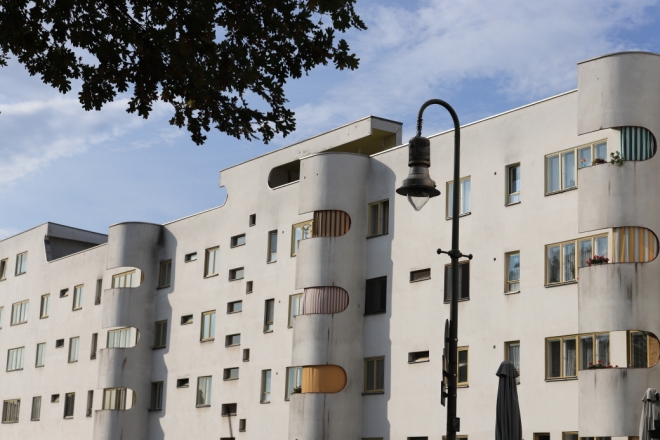 Berlin, despite the destruction of the Second World War and the splitting of the city in two, has fortunately managed to preserve places of modernity like Siemensstad.

Ce quartier est, avec cinq autres quartiers de la ville, classé au patrimoine mondial de l’UNESCO depuis 2008. Ces six Together with five other parts of the city, the district has been a UNESCO World Heritage Site since 2008. These six housing estates were built between 1910 and 1933, mostly during the Weimar Republic: the modernist housing estates.

In a previous post, I invited you to Weisse Stadt which is one of the six districts https://wherever-it-is.com/2021/04/16/the-white-city-of-berlin/

Today we visit the Siemensstadt with its mixture of industrial and residential buildings which have been designated as UNESCO World Heritage sites.

Siemens moved to the area at the turn of the 19th and 20th centuries and built what was for a long time one of the city’s tallest industrial buildings (Siemensturm, 1916).

The various historic buildings that can still be seen today were mostly built between the First World War and the 1930s in an uncluttered style that remains very modern today.

This area of Berlin was part of the Elektropolis Berlin that I wrote about recently in a post https://wherever-it-is.com/2021/06/25/elektropolis-berlin/

Just before the outbreak of the First World War, 27,000 employees worked at this Siemens site.

The housing was built mainly between 1929 and 1934 with the aim of accommodating 5000 inhabitants. The main architect was Hans Scharoun, but there were other architects, including Walter Gropius, one of the directors of the Bauhaus. Most of them were part of the “Bund” movement, which gave rise to other such housing developments in Berlin until National Socialism came to power.

The ideals of this movement were those of modernity: to offer as many people as possible decent housing with modern comforts, light, often with walk-through flats, and the proximity of green spaces and services such as schools, playgrounds, etc. This utopian approach was not only supported at the time and the arrival of the Nazis in power put a (temporary) end to it.

One of the emblematic buildings is located at the entrance to the district: the “battleship”, in reference to its rounded shape.

Sharoun lived in Siemensstadt. In the 1950s he contributed to new buildings like these in Goebbelstrasse, both facades of the same building, again with references to naval architecture on the street façade:

And as is often the case, it is the details that are important and that break up the monotony of these large façades, as in this series of balconies:

Or these front doors:

Where to find it: https://goo.gl/maps/x2sztUKb6UqdG1g9A