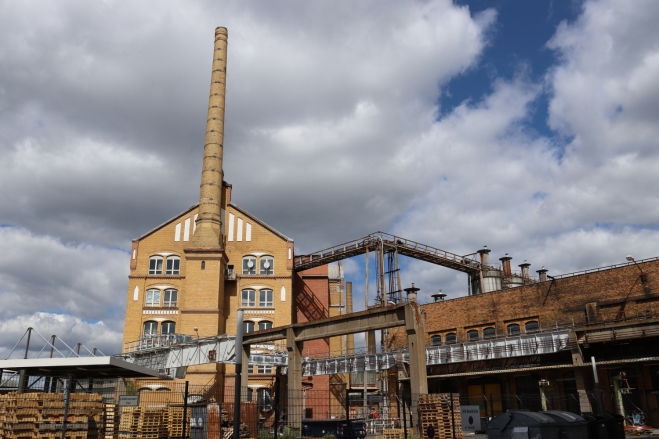 I covered in a previous blog two cities where the industrial revolution took place early and left many traces: Liverpool and Manchester.

The industrial revolution came to Berlin later and the traces of it are less present today than in the English cities. But that doesn’t mean that there is nothing left or that it is without interest.

I will concentrate on the eastern part of the city: Schöneweide. The electricity company AEG (Edison), founded at the end of the 19th century, had many industrial buildings here, many of them built at the beginning of the 20th century.

In Schöneweide, the remnants of the industrial district are mainly along the Spree with old brick buildings and a few more modern, somewhat derelict buildings.

Some of these brick buildings have been converted into commercial space, galleries, training centres or, as is often the case in Berlin, simply waiting to be developed:

In a previous blog I covered a photo exhibition in a gallery in Schöneweide in a disused and renovated hall: https://wherever-it-is.com/2021/06/04/back-to-the-museums/. A great place for a quiet visit.

A very large crane can still be seen in the district, used to move goods from the bank of the Spree into the interior of the district.

There is plenty of space and it is easy to imagine that this could give ideas, but it is not certain that in ten years’ time everything will still be in the abandoned state it is today:

It is abandoned, but I find a certain poetry in these doors and windows, in these pastel colours:

One thought on “Elektropolis Berlin”