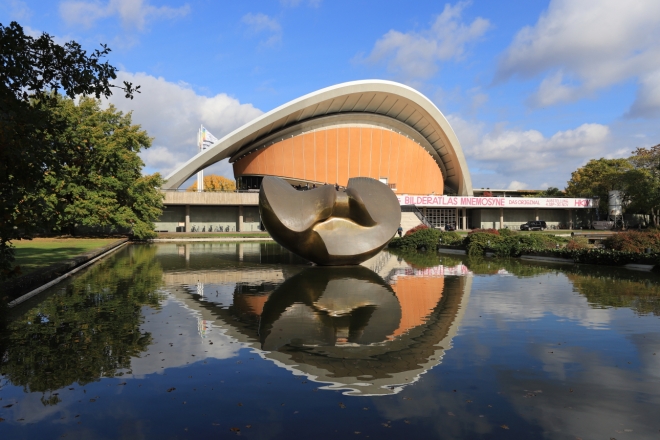 Here’s a surprising nickname for a 1950s building that now houses the Museum of World Cultures, Haus der Kulturen der Welt. This building has had a tumultuous history.

ocated not far from the Tiergarten, it is at the time of the Cold War in West Berlin. In the 1950s, the two Berlin municipalities will multiply emblematic architectural projects. I refer you to my posts on Berlin in those years.

In the West, an architectural competition was launched and the majority of the constructions were in Hansaviertel. Some examples of these constructions:

A few buildings were built elsewhere, Le Corbusier’s Unité d’habitation … and the building I’m talking about today, at the time called the Kongresshalle. It was donated by the Americans to the city of Berlin and opened in 1957.

In 1980, part of the roof collapsed during a press conference. After years of hesitation, then reconstruction, the building reopened in 1987. Rebuilt identically, its interior takes us back to the 1950s.

Where to find it: https://goo.gl/maps/pAsSLsBq4ShnxB8A9

One thought on “The pregnant oyster of Berlin”