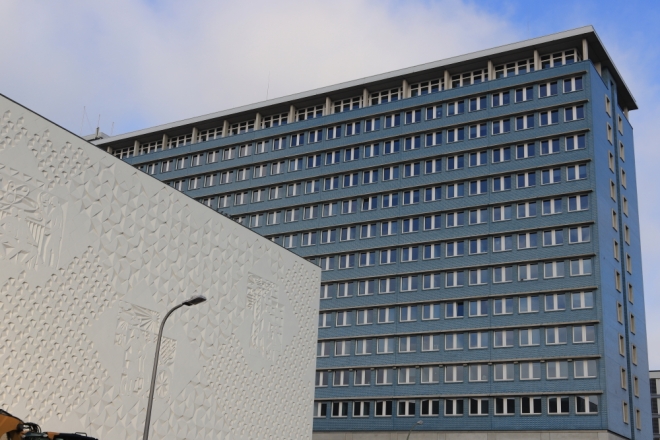 After the war, Berlin was considerably destroyed and housing was a crucial issue for both regimes, East and West. In the 1950s, ambitious housing programmes were built.

Probably the most emblematic of this period in the East is Stalinallee, renamed Karl Marx Allee in 1961. This building programme began in the early 1950s and various styles followed. The site was intended to be a showcase for the socialist government, the buildings were modern with all the comforts that were missing in many pre-war dwellings.

Work began in 1952 in a grand style, particularly at Frankfurter Tor. The regime is asserted by the creation of “palace” type buildings. The avenue itself is 89 metres wide and almost 2 km long, with an east/west axis.

From 1958, with the lack of means and then the de-Stalinisation, the style became simpler, the ornamentation on the facade disappeared. Cinemas and cafés were also built, very interesting buildings to see.

It remains a very emblematic place of Berlin, to be visited with Alexander Platz forming its western end.

One thought on “East Berlin in the 50s: Karl Marx Allee”